My fellow Toronto bloggers will already be WELL aware of this, but for those who don’t follow weather news, the latest is that my city just received more rain in two hours than it normally does in all of July. We’re talking 90 mm all at once, which led to insane flooding. And where do I happen to live? Oh, just near the lake and next to a buried creek, meaning my neighbourhood suffered some of the worst water damage. Basically EVERY house on my street now has a rolled-up wet carpet on their front lawn, waiting to be picked up by the city. “How bad was it?” you ask? Well, here are some photos to demonstrate: 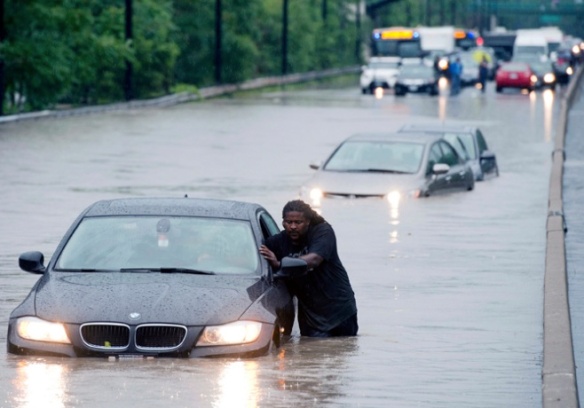 And right across the street from our house, an enormous tree toppled over, landing right on the women’s shelter — not because of wind, or lightning, but because the root structure got soaked to the point of being unstable:

Anyway, the result of this insanity is that our basement was one of the many that flooded, both with rainwater (our downspout hasn’t been disconnected yet, so all the rain falling onto our roof goes through the eavestroughs and down into the pipe below our house) and sewage, because the city’s drains couldn’t keep up with the pace, meaning everything back-flowed into residential pipes. There was poop-flecked water basically erupting out of our bathtub, toilet and sink, and my hubby could not bail it out fast enough. We were using huge garbage bins and buckets to bail, towels, the shower curtain and even a leftover bag of grout to try and build a dam, to at least contain it in the bathroom, and then hubs went outside to literally rip off the downspout with his hands and plug the hole with a pop bottle. In short, we tried EVERYTHING — and it still wound up pouring over into the main basement area, soaking the carpet.

It was a total shit show.

“Why didn’t you get a wet vac to suck up all the water?” you ask? Oh, we did. I bolted out the door to Walmart and spent $50 on the last one they had; got home, and then the power went out, so we couldn’t plug it in. It stayed out for the next few hours.

Did I mention that my husband also had to pack and leave for the airport about two hours after this whole ordeal began? Yep.

So anyway, he attempted to semi-clean the mess downstairs, but because the water was contaminated, he was adamant that I not go down there. Long story short: The entire house stinks, and we’ve now got a plumbing company digging up our front yard and our entire basement floor in order to install brand new pipes and a back-flow valve (to prevent sewage water from going in the reverse direction, even during heavy rain), all to the tune of almost $10,000. Because we really had that money kicking around, doing nothing (read: thank the lord for credit cards). Plus I’m more or less trapped in my house because the stairs leading up to our front door have been removed and there’s no access to the street from our backyard unless I want to scale a tall fence. Woohoo!

Want photographic evidence? This is where our front steps should be; in their place is currently a very sunburnt man in an 8-foot hole (I have offered sunscreen; he declined):

In other news, I’m around 25 weeks now (about 6 months); I’ve posted another photo to my Bump Pics page, but to be honest, it’s really no different than the previous one — the main difference is actually my bathroom, if you feel like checking that out awesomeness again. I also decided that my coping strategy in the midst of all this plumbing insanity would be retail therapy, so ended up stroller shopping with my mom (I think we’re going to try and source a good-as-new-but-a-lot-cheaper Bugaboo Cameleon from Craigslist or Kijiji), and she also bought me a baby carrier (decided to go with the Beco Gemini because it was the most comfy to wear and very simple and streamlined; the Ergo ones seem really bulky and I think you can’t wear them on your back or something, and the Baby Bjorn ones in the store had a lot of straps and fussy accessories, and the saleswoman said something about more susceptibility to back aches with those. And slings? I’m a hippie in a lot of ways, but I just don’t think I’m a sling girl… we’ll see). Then my friend and I escaped to IKEA, where I succumbed to a Poang rocking chair. My hubby wasn’t initially on board because, in his words, “A Poang is so obviously a Poang,” but they really are the cheapest and most comfy rocking chairs EVER. Aaaaand, they now make BABY POANGS FOR YOUR BABY SO YOU CAN HAVE MATCHING CHAIRS!!!

The one we got is this guy:

It’s a bit crazy looking, I know, but understand that we’re trying to create a nursery from an office that’s already been decorated as an ironic 1960s cabin, complete with starburst clock, paint-by-numbers on the wall and deer wallpaper. It’s kind of kitschy on purpose — and we’re frankly too broke to do a complete overhaul with pastel colour scheme or whatever. So baby gets a “vintage woodland” theme, as I like to call it.

22 thoughts on “The apocalypse is here, and it’s in my basement…”