On a completely unrelated note: Can I just say a big WTF to all the news about Halle Berry expecting her second child — her PR rep actually said, “This happened naturally — everyone is really happy.” And then, it comes out that she is “three months along” and “having a boy.” Um, EXCUSE ME?! She is 46!! This did SO NOT happen naturally, especially not if she already knows the gender. Ugh — we need more celebrities to be open about their methods of conception and not perpetuate this idea that you can naturally get knocked up at 46 for gawdsakes. OK, rant over.

My actual post for today, which is far nicer:

A little while back, one of my close friends — who was updated on our fertility struggles very early on — sent me this list of 18 words and terms that should never have become obsolete. One of them was a 1950s folk saying from the Ozarks; apparently, these crazy kids used to refer to the state of being pregnant as being “with squirrel”. On the one hand, it’s kind of adorable; on the other, it’s pretty creepy (as the Ozarks generally are). I joked to her at the time that, if I ever got up the nerve to make a Facebook pregnancy announcement, I’d deliberately confuse everyone by declaring myself “with squirrel”.

Recently, this same friend knew that I was getting increasingly worked up about our 12-week ultrasound, so she came by yesterday with a little token to keep my spirits up… kind of a good luck charm, almost. Check it out: 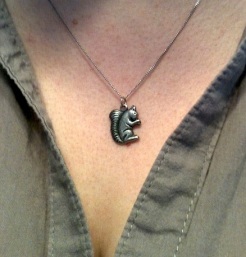 How sweet is this little guy? He came all the way from Scandinavia (which isn’t the most fertile region, but whatevs). Normally I don’t believe in the power of inanimate objects to help determine fate, but in the same way I used to bang my head against my textbooks in university, hoping the information would somehow seep into my brain, I’m keeping Mr. Squirrel close to my chest in hopes that he’ll ensure there’s a live, healthy “squirrel” inside me on Thursday. THREE MORE DAYS!