I had my second pregnancy-themed nightmare last night (OK, I know, DREAMS ARE NOT INTERESTING TO OTHER PEOPLE, but just bear with me for a moment). I dreamed that I was in a hospital and was diagnosed with a brain tumor and the doctors couldn’t do anything about it. They cut my head open and tried to perform surgery but it didn’t work. And then they said I only had a few days left to live, and because the baby hadn’t yet reached viability, it would have to simply die with me.

Gee, THANKS SUBCONSCIOUS! Way to come up with the most insanely depressing situation anyone could possibly suffer. Typing this out, I realize it’s so ludicrous that such a thing would happen — not just to me, to anyone — but waking up from that in the middle of the night was so damn terrifying, it took me hours to get back to sleep.

I think this is a reflection of a) the fact that I’ve become way more emotionally attached to this fetus than I like to admit, either to myself or others; and b) the fact that I just listened to an hour-long Radiolab podcast called “23 weeks 6 days” about a woman who delivered a baby one day shy of viability and the horrors she endured waiting to see if it would survive; and c) the fact that, despite odds being in our favour, I am completely petrified that our baby has Cystic Fibrosis. I’ve actually researched this disease extensively now — that’s how sure I am that our tests are going to come back positive. But weirdly, I kind of woke up from this nightmare thinking, “I would GLADLY take a child with Cystic Fibrosis over a terminal illness that kills both of us right now.”

The other reason I’m so convinced we’ll get bad news is that I feel like I’ve been too lucky in life — yes, I’ve dealt with a couple years of infertility and the stress of IVF and an ectopic; yes, I’ve also dealt with my mother battling cancer twice and nearly succumbing to it. But fortune has almost always been on my side, and I’m due for it to run out. I look at all these people around me who’ve had major tests in life, whether it’s a close family member dying or abusive/estranged relatives or late-term baby loss or whatever, and I keep wondering: When is my Big Test going to happen? Everyone has to endure at least one Big Test in life that really pushes them to the edge, and I’m sure mine is coming. So is it going to be a problem with my child? I just wish I knew already…

On a lighter note, can we talk about the fact that we haven’t signed up for daycare, or found a pediatrician, or drafted a will, don’t yet have a crib, baby carrier, stroller or any other “essentials”, but I am *thisclose* to purchasing a teenie tiny coffee maker: 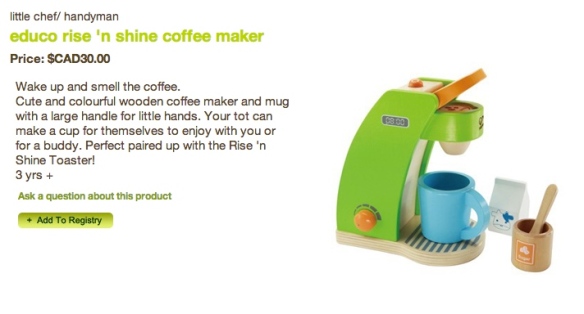 HOW ADORBS IS THIS? And such great training for when the kid finally learns that he will never get what he wants unless mummy is caffeinated first.

22 thoughts on “Terrified of the Big Test”