OK, so a while back I read this day-in-the-life post by Non Sequitur Chica and resolved to do a similar thing myself. A lot of people may find this type of post mundane as all hell, and I totally get that, but I personally love getting a peek into how other moms do EVERYTHING, right down to what brand of bottle they use or what time their kid has a morning nap. I can never have enough detail. So with this in mind — and also because I want to have some record of what M and I do all day, for when I’m old and can’t remember anything — I present, “A day in the life of a not-yet-back-to-work mom with a 10-month-old son, and a kitty and a husband, who all live in a small house in a big city.” (With lots of pictures)

7 a.m. – M wakes up. (OK, let’s be honest, it’s usually closer to 6:30.) He starts by babbling contentedly, with a bit of “babababa” followed by some “yayayayaya”, which means I can ignore him and lie in bed for a bit longer. Soon, though, it turns into grunts and whines, and if I ignore those because it was a particularly late night and I have a headache and I just desperately need five more minutes, it turns into actual crying, at which point I haul my ass out of bed, go to the nursery and get him.

7 to 7:30 a.m. – I breastfeed him in our bed, usually lying down because so very very tired still, and then we kind of roll around and cuddle and play for a bit because horizontal everything is just better at this hour.

7:30 to 8 a.m. – I change M’s diaper, tossing the gross disposable into the Diaper Genie and putting him into cloth diapers. Still in PJs, we go downstairs to play in the living room for a bit, quietly, so daddy can try to get some extra beauty sleep.

I turn on the radio (CBC French, because he needs to learn a second language!), let the cat out, or in, depending on where she spent the night, and start making M’s breakfast (I know we should eat together to make things easier but I’m really not hungry at this godforsaken time… can you tell I hate mornings?). Daddy finally gets up and comes down to give us kisses before heading to the third-floor office to work.

8 to 8:30 a.m – Breakfast. At 10 months, M is pretty good at feeding himself; we’re at about 75% independent eating, with the remaining 25% either spoon-feeding or me pre-chewing something a bit before shoving it in his gob. He can use the sippy cup by himself and we’re just starting to give him cow milk. His morning meal usually consists of a few different fruits cut into small pieces, toast soldiers with peanut butter, some yogurt mixed with banana and a tiny bit of maple syrup, and water.

8:30 to 9:15 a.m. – I take M to the kitchen sink to wash his hands and mouth (don’t let that picture above fool you — there is a BIG mess after he’s finished eating!), then plonk him down by the floor-length mirror in the front hallway to occupy himself while I clean up the mess. Then we head upstairs and brush our teeth together — he sits in the rocking chair, gets some water on his little baby toothbrush and chews on it while I brush mine properly. And then it’s time for me to shower — I sometimes have him play in his crib during this time, but usually let him sit on the bathroom floor so he can see me. 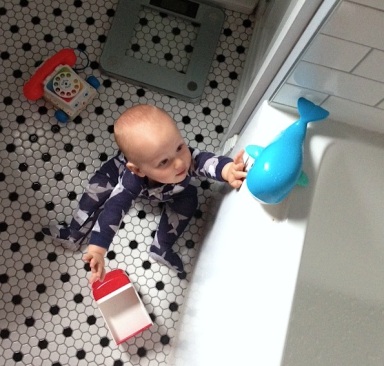 … and then I get dressed, and he’s content to just sit in the bathroom still while I blow-dry my hair. He was obsessed with the blow-dryer as a newborn and continues to be transfixed by it, though I can’t get more than five minutes before he’s all, “Get me off this damn bathroom floor already, woman!” Sooooo, with half-wet hair, I scoop him up and change his diaper again because he’s usually pooped.

At 10 months, it’s VERY hard to change his diaper — he’s rolling all over the place, kicking, punching, squirming, thrusting, etc. Somehow we get it done, though, and then I wrestle him into his clothes for the day.

9:30 to 10:30 a.m. – Morning walk. I strap him into the Bugaboo and we get going, usually heading to one of two nearby parks that have playgrounds with bucket swings, tiny slides, wading pools and sandboxes. This particular sandbox has a bunch of toys that parents leave behind permanently, which means M spends more time playing with a firetruck and less time shoving fistfulls of sand into his mouth. 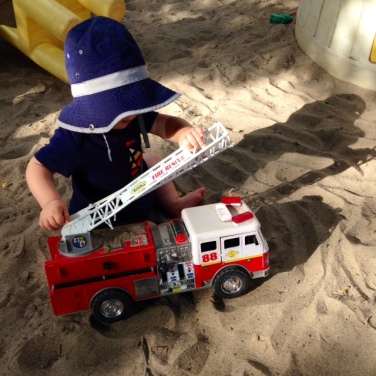 10:30 a.m. – Nap #1. We get home, I breastfeed him and, finally, the kid falls asleep for his morning nap. He certainly doesn’t like going to sleep, so there can be a bit of fussing and protesting, but once he’s out, the snooze-fest can last for up to two hours. This is when I make my own breakfast and coffee and check email and maybe even do some laundry if I’m feeling ambitious.

12:00 p.m. – M wakes up, and sometimes takes another nursing session, depending on his mood. Another diaper change, too, and then I bring him downstairs. He loves our cat Weeps, so I’ll often let him stroke her (with my supervision, which is basically just me yelling “Gentle gentle gentle!!” as he grabs tufts of fur). And because he’s really close to walking now, I’ll sometimes prop him up by the chair so he can practice standing.

12:30 p.m. – Lunch. This meal closely resembles breakfast, except I’ll try to include a different carb like rice or a chapati or pasta, fewer sweet things and more veggies, and often protein in the form of cheese. On this particular day, the vegetables were lacking, so I resorted to some squeezy packs of organic purée.

1 p.m. – After lunch, I clean up, pack his diaper bag and we head out again. Our afternoons are more social, involving meet-ups with friends to go to the art gallery or maybe heading over to another neighbourhood for a play date. Soon, I hope to get a bicycle that can fit a front-mounted Yepp Mini seat for M to ride in, but until then, we most often get around town in the Prius. 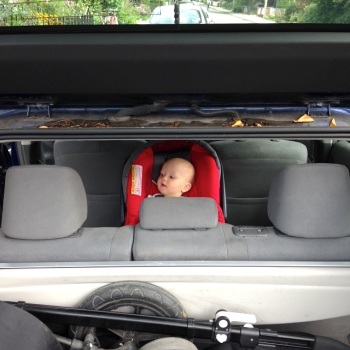 On this day, we hung out with a friend of mine who has a baby the same age as M. He loves having different toys to play with, and she loves… well… playing with him. And grabbing his butt. 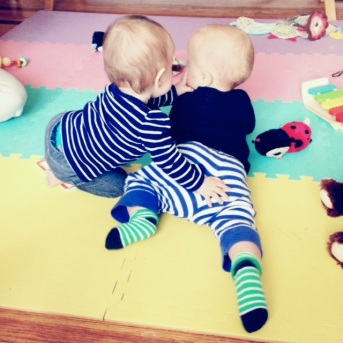 3:30 – At some point in this time frame, I’ve managed to eat lunch (it’s often take-out, or I’ll make a sandwich, or I’ll eat whatever’s in my friend’s fridge if she offers). By this point, however, M is getting cranky so we head back home — I keep my fingers crossed that he doesn’t fall asleep in the car seat because transferring him to the crib without waking him up is near impossible. If it’s a Thursday, I’ll usually arrive to find our week’s worth of clean diapers waiting for us on the front porch.

3:30 to 4:30 p.m. – M takes his second nap, which is fitful and involves more protesting and sometimes, frankly, doesn’t happen at all. I don’t like to let him sleep past 4:30, though, so regardless of how much shut-eye he’s gotten, we are back up for another diaper change and more activity, with the focus being distraction distraction distraction. I often change his clothes by this point because he’s mucked himself up throughout the day despite my attempts to keep him clean.

4:30 to 6 p.m. – I take this time to get errands done, maybe walking with M to the grocery store or, on this day, schlepping over to Rona to purchase a vanity for our basement bathroom, which we’re renovating. Boring for both of us, to be honest, but at least M got a fun ride out of it and lots of attention from the adoring cashiers. 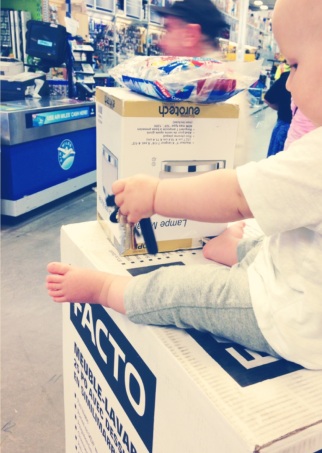 6:45 p.m. – M has his dinner. Again, I know it would be easier to only cook one meal and have us all eat together, but part of being a grown-up is eating at a grown-up time, which is not 6:45 (in my opinion, at least. No offence to the early eaters and/or Bubbies). Granted, I could just wait another 15 minutes and it would be 7, which is totally acceptable, but I suppose the real problem is that I’m not entirely relaxed while M is eating, so I’d rather just wait until he’s asleep, and starve a bit in the mean time. Doesn’t make much sense, I realize, but it’s how we roll. 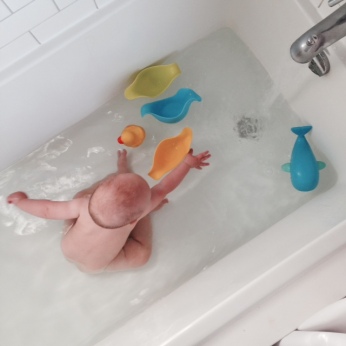 7:30 p.m. – Daddy manages bath time while I clean up the mess from dinner, which sounds like an unfair deal except that I’d actually rather clean and not deal with a baby by this point. Once M is bathed and towelled off, however, I head up for about 10 minutes of naked time (M is naked, not us). He rolls around on our bed and gets his last few bursts of energy out and generally looks adorable.

7:45 p.m. – I coat his butt in “cream and sugar” (ie. zinc cream and a clay-based baby powder), strap him into a Seventh Gen disposable and get him into his PJs. We kiss daddy goodnight, read a picture book — his favourite is Orla Kiely’s Creatures — and then I’ll sing him a lullaby (let’s be honest, it’s usually “The Gambler” by Kenny Rogers or a weird, slowed down version of national anthem because those are the only songs I know all the words to) while nursing him one last time. Afterward, we say “goodnight” to a few things in his room (the mobile, the deer on the wall, his nightlight, the ukulele), and then he lies down in the crib with his IKEA owl puppet and a pacifier and a small blanket. I give him a kiss and rub his back and he usually drifts off without too much objection.

8 p.m. – Grown-up dinner. Daddy usually goes for a jog or a bike ride while I cook, but if I’m sick of being in the kitchen all day I’ll sometimes make him prep the meal instead. On this day, dinner was a frittata, and I’m the only one who knows how to cook it without effing it up too badly. Hubby helped with the side salad, though. 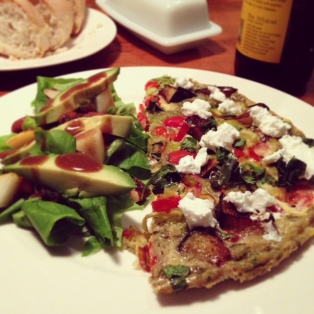 9 p.m. – We usually aren’t finished dinner until now, at which point hubs does the dishes while I relax on the couch and, full disclosure, have another glass of wine, because our glasses are totally small anyway. Our night gets finished with a bit of TV (currently making our way through 20 episodes of The Killing — the Danish version), or sometimes reading.

My mom snapped this candid pic of my boy and me swimming in the lake at the cottage recently; I am such a cynical, hard-hearted person but holy smokes does it ever make my innards melt… 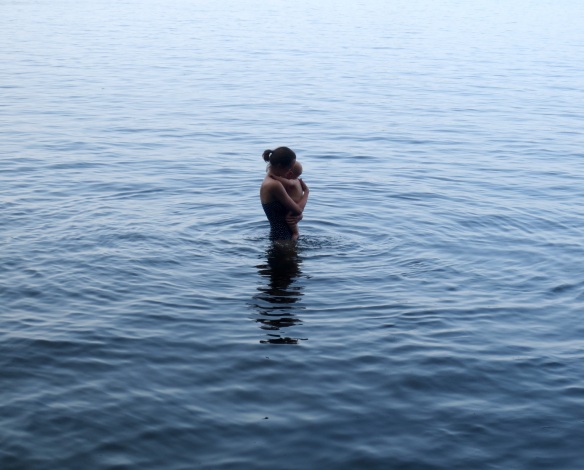 This blog's title is a nod to a scene in Breaking Bad, where Jesse Pinkman is so impressed by his former chemistry teacher's skills in solving a meth crisis that he hollers, "Yeah, Mr. White! Yeah, science!" That's kind of how I felt as I went along the path to IVF and learned how just a few meds and some very smart doctors could actually create life from a pile of dusty, useless reproductive organs. Now, I'm parenting an infant and writing about it and hopefully not forgetting all that I went through to get here... Oh, and here's the Breaking Bad scene, if you want to watch.